In general the drift in meaning, by means of grammatical metaphor, has been from reality as processes involving people and concrete things, to reality as relations between abstract things, as with the transference from marrying as process to marriage as thing. …

There is a set of regular principles for creating ideational metaphors — for reconstruing one kind of element as another. The most common include:

[1] To be clear, here Martin & Rose confuse the metaphorical realisation of a figure ("processes involving people and concrete things") as a group or word (marriage) with the elemental metaphor of a Process realised as Thing (marriage). 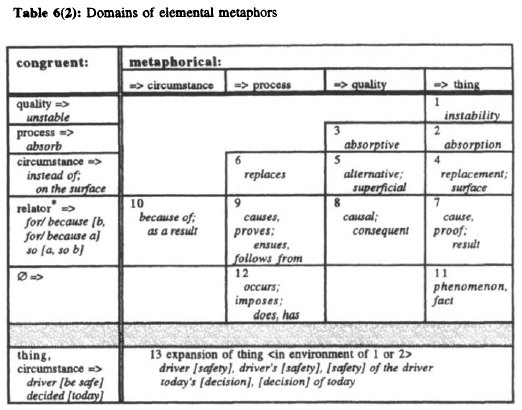 [3] To be clear, the authors' differentiation of ideational metaphor as either experiential or logical is invalidated by the inclusion of experiential categories (Process or Thing) in what they regard as logical metaphor.
Posted by Dr CLÉiRIGh at 00:00:00

Most Viewed This Week

Most Viewed This Month

Most Viewed This Year