Misanalysing Conjunctive Relations By Giving Priority To The View 'From Below'

Conjunction helps to manage what we expect to happen in a text. In an exposition, we expect a series of supporting Arguments, and Tutu confirms our expectations by explicitly adding each one. We also expect conclusions to be drawn from the arguments presented, and again Tutu meets our expectations by explicitly announcing each conclusion with Thus. In Chapter 3 (section 3.5) we saw that the unmarked relation in an activity sequence is simple addition, so that and is the most common conjunction in personal recounts, adding one event to another:


The circumstances of my being taken, as I recollect, were that I went off to school in the morning and I was sitting in the classroom and there was only one room where all the children were assembled and there was a knock at the door, which the schoolmaster answered. After a conversation he had with somebody at the door, he came to get me. He took me by the hand and took me to the door. I was physically grabbed by a male person at the door, I was taken to a motor bike and held by the officer and driven to the airstrip and flown off the Island.

[3] To be clear, here Martin & Rose give priority to the view 'from below' (the realisation of meaning as and) rather than taking the SFL perspective of giving priority to the view 'from' above (the meaning being realised by and.  The main disadvantage of this approach is that a single wording can realise distinct meanings.  For example, the conjunction and can realise additive extension, temporal enhancement or causal enhancement; Halliday & Matthiessen (2014: 487): 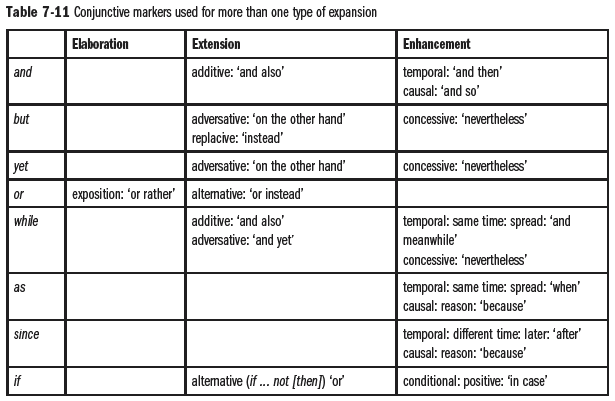 In the sample text, 3-6 of the 7 instances of and can be interpreted as realising temporal enhancement rather than additive extension — that is, in the authors' rebranded terms: successive time rather than addition.
Posted by Dr CLÉiRIGh at 00:00:00

Most Viewed This Week

Most Viewed This Month

Most Viewed This Year